Soybeans were first introduced in Europe in the 1700’s and has since become one of the most important beans in the world. In the U.S., livestock such as cattle and pigs consume over 25 million tonnes of soybean meal per year. Soybeans are also used as a low cost food additive, in vegetable oil and as a protein source. Although tofu, soy milk and other soy products have been developed for human consumption, only a small portion of the crop is actually allocated for foodstuff.

Soybeans were first produced and cultivated in China but nowadays the U.S. is the largest global producer of soybeans exporting approximately 37% of production. The top three states are Iowa, Illinois and Indiana. Another major producer is Brazil where soybeans are on par with coffee and sugar as one of the main exports.

Factors that can influence the price of soybeans are: 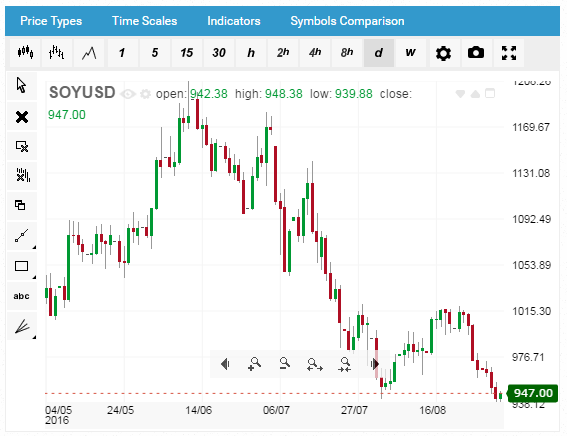 Trading hours: Soybeans trades daily Monday to Friday from 01:00 GMT and closes at 19:10 GMT. There is a daily break between 13:40 to 14:30. Spreads are usually higher during out-of-business hours.

For more information on Soybeans and other related trading products, go to our blog website, forex.info.