In many parts of the world, corn is known as maize. It is considered the most important grain crop in the world with 525 million metric tonnes produced annually. The U.S. is the leading producer with almost 270 million metric tonnes followed by China producing more than 110 million metric tonnes per year. With so much acreage dedicated to corn, this adaptable grain has become a staple in the diets of many people around the world. Its uses include animal feed, corn syrup in processed foods and beverages, to the ears of corn and much more.

Despite the diverse uses for corn, it is still primarily used as livestock feed. Throughout the U.S., cattle, chicken and hog ranchers depend on corn to maintain and fatten their livestock. A small portion of corn is diverted into corn syrup, new plastics and alcohol, and corn is also diverted to produce ethanol to create a cleaner, less expensive fuel source.

Factors that can influence price include: 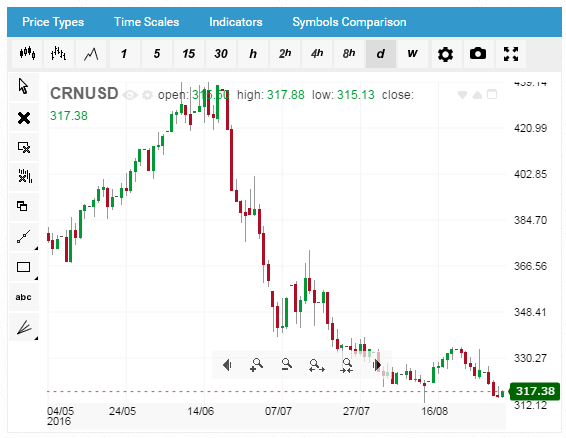 Trading hours: Corn trades daily Monday to Friday from 01:00 GMT and closes at 19:10 GMT. There is a daily break between 13:40 to 14:30. Spreads are usually higher during out-of-business hours.

For more information on Corn and other related trading products, go to our blog website, forex.info.