Platinum has become a popular trading instrument in recent years as traders have seen the benefit of trading this asset.

Traders looking to trade this instrument need to keep in mind the major price drivers. Platinum is predominantly traded in one country, South Africa (80%) and therefore any strike or disruption will have an impact on price. Platinum’s annual production is approximately 5 million troy ounces a year compared to gold’s 82 million troy ounces per year and silver’s 547 million troy ounces.

It’s special properties put it in large demand in diverse industries. From cars to jewelry to health science, it plays a vital role in everyday life. For example, cars which use catalytic converters account for 29% of the world production.

The price of platinum can be influenced by the following factors: 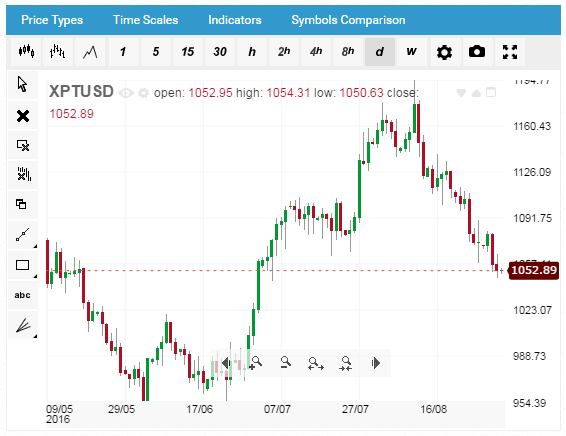 Like trading currencies, online trading in platinum with easyMarkets is “cash” settled i.e. there is no physical receipt of the underlying physical product.

Trading in the precious metals is done via ‘over the counter’ or OTC. OTC transactions are not centralised as in a stock exchange of a country. Trading is initiated directly between the buyer and the seller.

The contract specifications for platinum:

Trading hours: Platinum trading begins on Sunday 23:00 GMT and ends 22:00 GMT Friday night with a daily break between 22:00 to 23:00. Platinum is mostly traded worldwide between 01:00 – 17:30 GMT, Monday to Friday, and spreads are usually higher during out-of-business hours.

Price Quotation: The contract price is quoted in dollars and cents per troy ounce.

Traders can open positions in platinum using the day-trading option to trade the precious metals at spot prices.

For more information on platinum and other related trading products, go to our blog website, forex.info.