As well as heating homes, natural gas has important implications in industrial and commercial settings. Economically, environmentally friendly and efficient, natural gas is the cleanest-burning fossil fuel and technology is improving so as to capture, transport and distribute this energy source.

Trading natural gas requires a considerable amount of attention and should be left to only the most active of traders. Neglecting your position for even a short period of time can have a dramatic effect on your trading position.

The price of natural is influenced by the following factors: 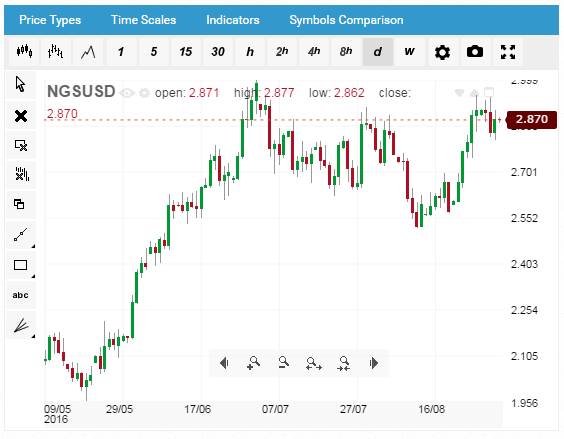 Expiration date: Commodities and indices are traded as CFDs with easyMarkets and expire at 12:00 GMT. Please note, OIL expiration time is 15:00 GMT. The expiration of each deal is displayed on your trade ticket, open position and on MT4 Market Watch.

easyMarkets® does not rollover expiring deals to the new contract, unless notified beforehand. The client should directly contact easyMarkets one working day before expiry of deal for renewal. Client should note that in the case of renewals, easyMarkets® will not carry the profit or loss to the new deal. Any profit will be credited to your trading account and any loss debited.

easyMarkets also reserves the right not to renew the deal if it so chooses.

If instructed to, as soon as the old deal is automatically closed, a dealer will open a new deal expiring in the new month that follows the expired deal with the same amount and type of the closed deal. The remaining margin on the expired deal will be placed on the new one, unless the client instructs the dealer otherwise. The opening rate of the new deal will be done at the new month’s rate.

Using an OIL/USD deal as an example: at expiry time 12:00 GMT the old contract closing price was at USD35.50 per barrel and the new contract price is trading at $40.50. At expiry, the old deal will be closed automatically at $35.50. Any profit or loss will be reflected in the margin and thus in the free balance. If instructed, the dealer will open a new deal at a price of $40.50 (the price of the new contract at 12:00 GMT), and place an amount equal to the remaining margin on the old deal, unless instructed otherwise.

In order to inquire about expiry date of current contract and difference in prices between the two contracts, please contact your dealer.

Trading hours: Natural Gas trading begins on Sunday 23:00 GMT and ends 22:00 GMT Friday night with a daily break between 22:00 to 23:00. Natural Gas is mostly traded worldwide between 01:00 – 17:30 GMT, Monday to Friday, and spreads are usually higher during out-of-business hours.

For more information on natural gas and other related trading products, go to our blog website, forex.info