Brent oil is the light, sweet crude sourced from the North Sea. This crude oil was named ‘Brent’ after the Brent goose, as the oil exploration company Shell Oil had a policy to name its fields after birds. The grade is described as light because of its low density, and sweet because it has a low sulfur content. It is extracted from the North Sea.

Price is based on deals in the London-based Brent market, which is an informal arena where about $100 billion worth of oil contracts are traded each year.

USD strength: because Oil is traded against the USD any large moves in the relative strength of the Dollar will affect the Price of Oil.

Geopolitical concerns: A lot of the World’s Oil is drilled in Countries where political risk and instability is common. Fresh problems can create periods of extreme volatility. 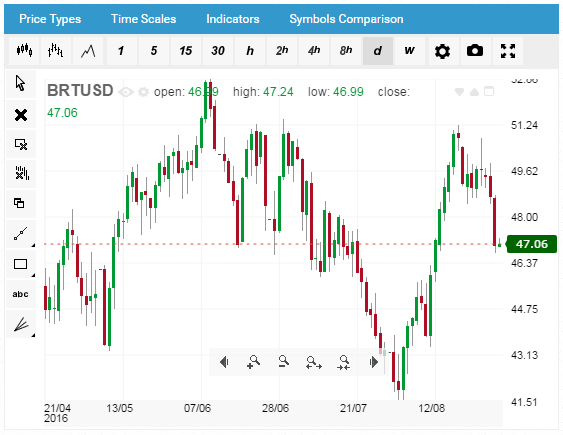 Specifications for trading Brent Oil on our platform

Expiration date: Commodities and indices are traded as CFDs with easyMarkets and expire at 12:00 GMT. Please note, OIL expiration time is 15:00 GMT. The expiration of each deal is displayed on your trade ticket, open position and on MT4 Market Watch.

easyMarkets® does not rollover expiring deals to the new contract, unless notified beforehand. The client should directly contact easyMarkets one working day before expiry of deal for renewal. Client should note that in the case of renewals, easyMarkets® will not carry the profit or loss to the new deal. Any profit will be credited to your trading account and any loss debited.

easyMarkets also reserves the right not to renew the deal if it so chooses.

If instructed to, as soon as the old deal is automatically closed, a dealer will open a new deal expiring in the new month that follows the expired deal with the same amount and type of the closed deal. The remaining margin on the expired deal will be placed on the new one, unless the client instructs the dealer otherwise. The opening rate of the new deal will be done at the new month’s rate.

Using an OIL/USD deal as an example: at expiry time 12:00 GMT the old contract closing price was at USD35.50 per barrel and the new contract price is trading at $40.50. At expiry, the old deal will be closed automatically at $35.50. Any profit or loss will be reflected in the margin and thus in the free balance. If instructed, the dealer will open a new deal at a price of $40.50 (the price of the new contract at 12:00 GMT), and place an amount equal to the remaining margin on the old deal, unless instructed otherwise.

In order to inquire about expiry date of current contract and difference in prices between the two contracts, please contact your dealer.

Trading hours: Trading is conducted 23:00 until 22:00 GMT, Sunday to Friday with a daily break between 22:00 to 23:00. Outside these hours no opening or closing of deals will be allowed.

For more information on Brent oil and other related trading products, go to our blog website, forex.info.